Eucerin Vs Nivea: What’s the Best Brand for Your Skin in 2022?

Most skincare products claim they will work on your skin like magic. But do they really? This makes it tough for people to decide which product or which brand will best go with their skin. Today we will be talking opening up about Eucerin vs Nivea, and which one will be the perfect choice for you.

Eucerin has been extensively used in skincare ointments, special lotions, and creams. Long story cut short, anything with Eucerin is going to make dermatologists’ choice because its skincare benefits are so good.

Nowadays, Eucerin has quite a wide range of skincare products that are hot-selling in the market. They are known for their immense suitability and benefits on sensitive and damaged skin. Their products are a big success in the market especially their Q10 Active anti-wrinkle cream

As a matter of fact, Nivea cream was also based on an emulsifying agent called Eucerit. This ingredient has certainly paved a glittering way for Nivea in the skincare industry. 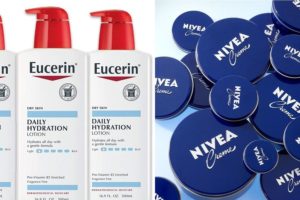 One thing that you should know about the Eucerin Q10 Anti-Wrinkle Face Cream is that it is not all a good choice for people with oily skin.

The Eucerin Q10 Anti-Wrinkle Cream is a gentle cream that reduces pimples and signs of aging in the most non-irritating way. Most dermatologists recommend this anti-wrinkle cream also because of the brand’s medicinal product existence.

If you like using fragrance-free products, then this Eucerin product will be the best choice for you. You will notice softer, moisturized, firm, and younger-looking skin with this amazing anti-wrinkle cream.

Nivea Q10 Plus Anti-Wrinkle comes with SPF15. It works on visibly reducing the signs of aging but mostly importantly wrinkles. You will notice the signs of premature aging go away within a few weeks only. The SPF15 provides the necessary sun protection to save your skin from getting exposed to harmful UVA and UVB rays.

The main differences are just that the Eucerin cream is a medical and dermatologist recommended brand choice. While Nivea is a cosmetic and personal use product choice with the added benefit of SPF15. 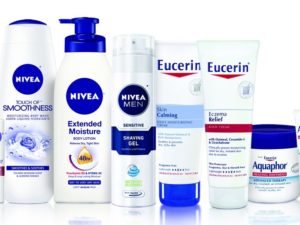 A good skincare lotion like Eucerin’s Hydration Lotion can help you deal with dry skin and sunburn issues. Be it the summer season or the winter season, this amazing skin lotion will soothe and replenish your skin. Just the way you have always wanted.

Nivea’s Body Lotion consists of almond oil and a deep moisture serum as well. This combination works phenomenally well to reduce wrinkles as well as skin plumpness. This lotion is the perfect choice for people who have dry to very dry skin. The effect of its application can last up to 2 days at a stretch. It keeps the body moisturized for a longer duration.

The main difference between Eucerin vs Nivea is that Eucerin lotion is the unscented one while the Nivea lotion smells like almonds. The Nivea lotion is quite hydrating to the extent that you won’t feel the need to reapply it. It is the perfect choice for all seasons because it isn’t greasy. Eucerin isn’t suitable for oily skin but works great on all skins during the winter season apart from the driest summer days.

Is Eucerin a good brand?

Yes, absolutely if you compare Eucerin vs Nivea. Eucerin is a great brand with multiple ointments, special lotions, creams, facial product ranges, and other high-end skincare product ranges. The brand is highly recommended by dermatologists and you will probably find one at the pharmacies as well.

Eucerin vs Nivea
Prev post L'Oreal vs Clinique: A Fair Comparison
Next post Keranique Vs Nioxin: Which One’s the Best Solution for Your Hair in 2022